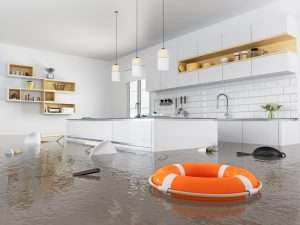 The only thing worse than your basement in Augusta flooding is your basement flooding again a second time. Because basements are, by definition, the lowest level of a building and typically built below ground level, they are inherently prone to flooding. Basement floods, whether one time or recurring, can be caused by a number of reasons; but here are a few of the most common causes of flood damage to the basement.

The hot water tank is designed to constantly fill and refill itself, so that there is always a supply of hot water. As sediment and rust build up over time, the tank that houses the water supply can begin to corrode inside. With any increase in pressure, the strain can spring leaks in the tank. When there is a leak in the water tank, the flow of water is endless because of the appliance’s design to constantly keep itself full. Without proper care, regular inspection, and routine maintenance, the hot water tank will be even more susceptible to leaks. Hot water tank failure is a very common culprit of basement flood damage. Be sure to call your water damage cleanup professionals when this happens.

When a blockage occurs in a sewer line, or the system gets overloaded during heavy rains, sewage can backup and flood into the basement. When flow is restricted in sewer lines, it will take the path of least resistance. Blockages restrict flow, which leads to sewage back up that could end up flooding into the basement. When the pipe system is full and the water levels in the manholes rise above the top of the pipes from excess water, the sewage level in the system could exceed that of your basement, which means that the flow is blocked, so sewage is directed towards your home instead of away from it. If this happens, sewage water can flood into your home by way of the lowest fixture, which is usually a floor or shower drain.

Water damage from a flood, and really no matter the cause, needs to be handled with water damage cleanup right away. Be aware of potential flood hazards in your basement, and if you do happen to suffer from flood damage, let the professionals at Southeast Restoration handle the water damage cleanup.

Please fill out the form below to contact us today. If this is an emergency, please call for immediate service.